The Importance of Oxygen Sensors and How They Work 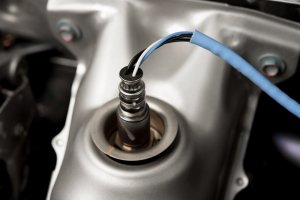 Your car’s oxygen sensors may be responsible for your “check engine” light being on. Learn more about these tiny sensors here.

Oxygen sensors are some of the most essential elements of your car. Developed in the late 1960s by the Robert Bosch company, the oxygen sensor measures the amount of oxygen in liquid or gas.

Here’s what you need to know about oxygen sensors, and why paying attention to yours is so important.

What is an Oxygen Sensor?

An oxygen sensor measures the amount of oxygen in liquid or gas. We already covered that. The question now is how, exactly, it does that. The truth is that the process is pretty simple.

Oxygen sensors are made using ceramic-coated zirconia and platinum. Currently, they can be found on all cars manufactured after 1980. The oxygen sensor lives in the emissions control system and sends data updates to a computer within the engine. When the O2 sensor is working well, it ensures that your engine continues to run at top performance and that emissions are consistently in check.

If your oxygen sensor fails, your check engine light will come on. What’s more, a car with a faulty oxygen sensor will not pass an emissions test.

Signs Your Oxygen Sensor is Failing

When your oxygen sensor starts to fail, the signs are many and straightforward. Here are a few of the most common indications:

Unlike oil and air filters, oxygen sensors don’t need to be replaced regularly. Instead, they should only be replaced when they fail.

Because they’re such a critical component of your car’s overall emissions system, and because they monitor the amount of oxygen present in your exhaust and transmit that information back to your engine’s computer (which then adjusts your car’s air-to-fuel ratio), oxygen sensors impede your engine’s ability to function correctly when they fail.

This, in turn, creates many of the issues above, including lower fuel economy, higher emissions and possible damage to other elements of your car, like your catalytic converter. Unfortunately, there’s not currently an advanced warning system on vehicles that tells you your oxygen sensor is failing, so car owners need to look for other signs to clue them into the fact.

The Importance of Having Your Oxygen Sensor Evaluated by a Professional

If you’ve noticed any of these signs in your car, don’t fear. Having your oxygen sensor replaced isn’t as difficult as it may seem. It’s also not a DIY job, though.

If your oxygen sensor is failing, contact our team. We specialize in caring for your entire catalytic converter and exhaust systems, as well as mufflers and oxygen sensors. We’re here for you, and our qualified mechanics are happy to diagnose and repair your issue.