Catalytic Converters: Their Purpose and Importance

Learn everything you need to know about catalytic converters, mufflers, exhaust systems and more here. 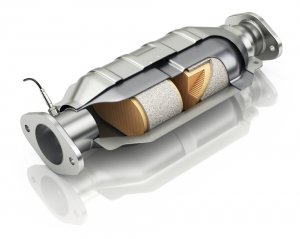 While there’s no doubt the invention of the automobile made the world a more convenient place, it also made it a more polluted one.

When they run, automobiles spit out pollution that can blacken buildings and create poor air quality. No matter how convenient automobiles may be, this pollution harms the environment and decreases the quality of life for people who live in major metro areas with lots of cars on the street.

Luckily, technology has come up with a solution: the catalytic converter.

Here’s everything you need to know about these handy tools, and how they do the work they do:

Car engines run on diesel or gasoline, both of which are made from petroleum. Petroleum, in turn, is comprised of hydrocarbons. When hydrocarbon fuel burns with oxygen from the air, it releases a great deal of energy. Because gasoline contains about 150 different chemicals (including additives), it produces more than just power, though: it produces pollution.

The pollution created by burning gasoline creates carbon monoxide, VOCs, and nitrogen oxides that come together to form smog and haze. This, in turn, harms the environment and damages the quality of life for people who live in densely populated areas.

What is a Catalytic Converter?

While pollutant gasses are comprised of harmful molecules, those molecules are composed of atoms. Because of this, the best way to break down the gasses is to split the particles after they leave the engine but before they enter the air.

This is what a catalytic converter does.

While this may sound like a complicated process, it’s quite simple. Catalysts are chemicals that speed chemical reactions without changing their overall process. A catalytic converter, meanwhile, is a metal implement bolted to the underside of the car. It is comprised of an input and output pipe. The input pipe pulls hot fumes from the engine, while the output pipe pushes vapors out. As the gasses from the engine blow over the catalyst, it creates a series of chemical reactions designed to alter the gasses and convert them into gasses that will not harm the environment.

The Case for Catalytic Converters

While catalytic converters aren’t 100% effective at cutting emissions, they are an essential step on the road to reducing pollution from automobiles. Unfortunately, they only work well when they’re working well. If you need service for your mufflers or exhaust systems, contact our team. We offer a wide variety of auto repair services to keep you going down the road safe and sound.